In honor of the month of LOVE, we decided to share why we LOVE Austin. We post regularly about the most recent awards Austin has garnered – from “Best City for Job Seekers” to “Number 1 City to Watch” by Forbes. From young professionals to families, from elementary students to retirees, from start-up entrepreneurs to leading corporations, Austin is host to a hugely diverse population, and we’re doing a really great job at it. In 2013 Austin won numerous awards, including most ‘Aspirational City,’ topping nine out of ten of the nation’s ‘best-of’ lists.

From real estate to business, and education to lifestyle, Austin ranks high for being the best of the best. It’s easy to love a city with so much acclaim and we wanted to make sure our design showed it, too. To do this, we had to find the right graphic designer who could help us visulize our message, so we set out in search of one to join our growing Marketing Team. What happened was an amazing partnership of love and talent. Here’s why Realty Austin loves Austin and our new Graphic Designer Debbie Licon! With its award-winning pedigree and a graphic designer like Debbie Licon, we were able to capture the essence of Austin perfectly in this month’s infographic: Why We LOVE Austin. What are some of your reasons for loving Austin? 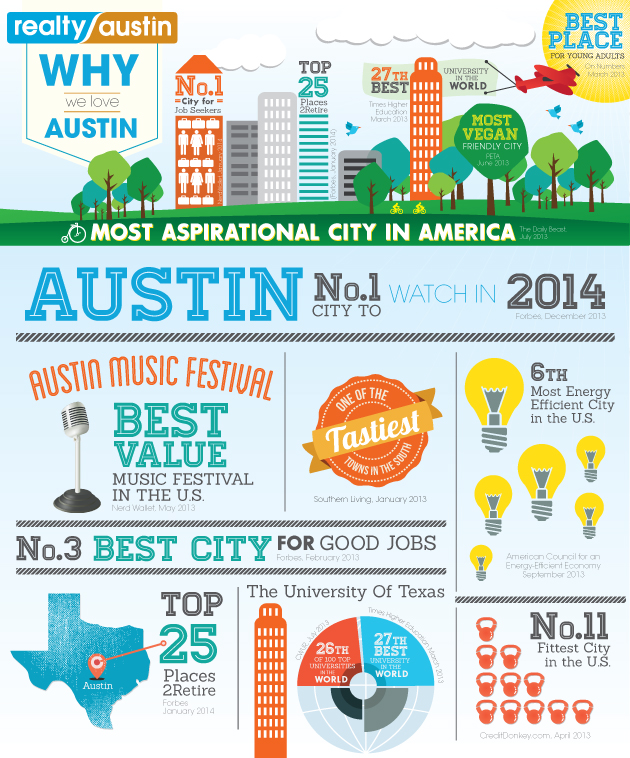