AUSTIN, TX–Realty Austin is proud to announce Jolene Weinstein, Market Manager of Realty Austin Lake Travis, was honored as ‘Manager of the Year’ by Platinum Top 50 of Austin. Weinstein was awarded the distinction amongst Austin REALTORS® at the annual awards ceremony.

Platinum Top 50 (PT50) started in San Antonio in 1999 and expanded to Austin in 2011. PT50 recognizes the top REALTORS and leaders in the industry, creating a network of elite professionals that exemplify initiative, success, involvement and philanthropy in the real estate industry. The Manager of the Year award is selected from individuals nominated for their strong leadership, contributions to their communities, and local business involvement.

Weinstein has led the Lake Travis market center for Realty Austin since its opening in June 2012, and delivered a 252% increase in sales by growing her office from 6 agents to 29 agents at the end of 2013. This highly productive group delivered over $150M in real estate sales in 2013.

Weinstein said, “At Realty Austin we work in a culture of mutual accountability to uphold a higher standard and continually raise the bar. Year after year we differentiate ourselves from the competition by innovating our systems, developing new marketing and sales tools, and emphasizing a servant leadership model in order to serve some of the best agents in Austin at the highest level. I look forward to an exciting future ahead accomplishing the ambitious goals set forth by our company and helping our team of rock star agents grow their business.”

Weinstein was recognized by Platinum Top 50 for her market center’s tremendous performance, but also for her personal achievements. Jolene is a recognized leader in the Lake Travis community where she serves in leadership roles with the Lake Travis Education Foundation, Leadership Lake Travis, and Lake Travis Chamber of Commerce.

Yvette Boatwright, co-owner of Realty Austin said, “It is our privilege to serve the Lake Travis community, and this award represents the strong values and excellence Jolene strives for everyday. Not only is she a dedicated and experienced manager, but also a caring person who truly loves the community in which she lives and serves.”

Jonathan Boatwright, co-owner of Realty Austin concluded, “Jolene’s leadership and performance have made her deserving of this prestigious honor, and we are very proud of her. Jolene has the skills, drive, and compassion to ensure the continued success of her team.”

Kathy Anglin, agent at Realty Austin Lake Travis said, “Realty Austin and my manager Jolene, made a huge difference in the success of my business. Everything from the automated marketing to the cutting edge technology, has allowed me to see immediate growth. Jolene really cares about our success and it makes all the difference to our team.” 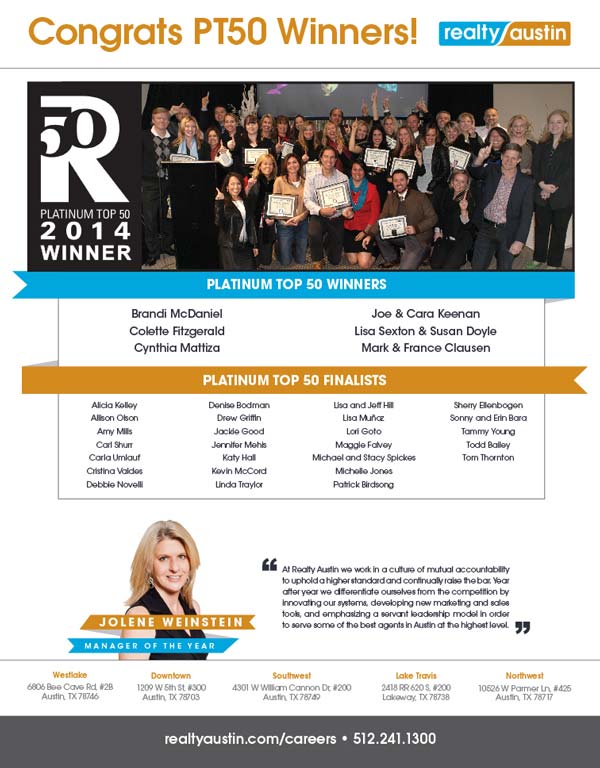