Read time: 4 minutes
Some of you may have read the recent report by a San Francisco based real estate company’s Chief Economist, Jed Kolko. Kolko claims that a number of Texas region metro areas, including Austin, are potential bubble markets to watch. This claim is based on his analysis that home values in Austin are overvalued relative to fundamentals.

In the aftermath of the financial crisis of 2008 which in large part was caused by a housing bubble, this is unsettling news and as real estate professionals, we would likewise be concerned if we believed it. However, we along with many experts, do not believe Austin is a housing bubble market, nor do we believe home values in the Austin market are overvalued.

So what exactly is a ‘bubble market’ anyway?

Trulia and Jed Kolko’s perspective in determining a housing bubble is based upon whether “home prices are overvalued or undervalued relative to their fundamental value by comparing prices today with historical prices, incomes, and rents. The more prices are overvalued relative to fundamentals, the closer we are to a housing bubble – and the bigger the risk of a price crash.” The chart below shows the relative pricing (over and under) as compared to fundamentals of the nationwide market over time. 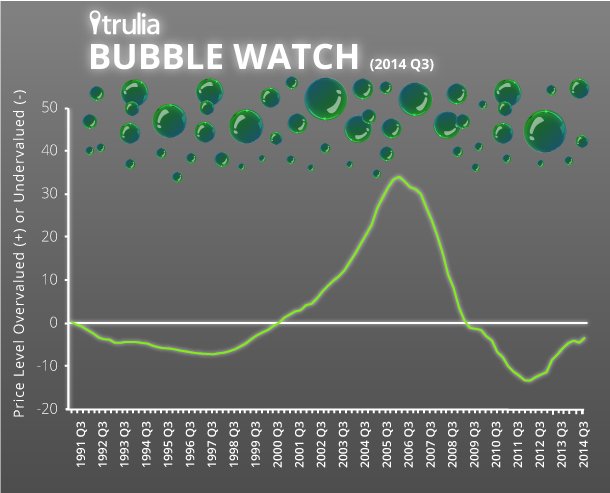 Back in the 2006 timeframe, nationally home prices soared over 34% as compared to fundamentals. In hindsight, this is what the bubble looked like. Fast forward to the present and we can see nationally the risk of a bubble forming is far from a reality. Jed claims the local Austin market is now 19% overpriced compared to fundamentals. What Jed’s analysis appears to miss, or perhaps not take fully into account, is that most experts today would indicate the cause of the past decade’s housing bubble was deregulation of housing finance and not simply an overpricing relative to fundamentals.

This has changed dramatically since 2006 since the Dodd–Frank Wall Street Reform and Consumer Protection Act was signed into law in 2010. In other words, the housing environment and potential drivers of a new housing bubble are very different now than it used to be. Of course fundamentals are fundamentals and we do not take issue with that. However, in Austin the recent price increases in both housing and rent have to do more with economics 101: supply and demand.

Austin is on numerous top 10 lists as a target destination, business are relocating here, and people are moving to Austin at the rate of 110 people per day making housing inventory tight. As a result, this is driving prices up and increasing rents. On a related note, stricter lending rules are now taking a large number of potential first-time homebuyers out of the equation–just 7% versus a more normal 30-35%.

According to Investopedia a Housing Bubble is defined as a run-up in housing prices fueled by demand, speculation, and the belief that recent history is an infallible forecast of the future. Housing bubbles usually start with an increase in demand, in the face of limited supply which takes a relatively long period of time to replenish and increase. Speculators enter the market, believing that profits can be made through short-term buying and selling. This further drives demand. At some point, demand decreases at the same time that supply increases resulting in a sharp drop in prices – and the bubble bursts.

Sounds pretty straight forward, but actually it’s quite complex. In fact, years after financial crisis of 2008, which was in large part precipitated by a housing bubble, there is little consensus among experts as to what caused it. According to Levitan and Wachter in their article “Explaining the Housing Bubble,” numerous explanations exist including misguided monetary policy, a global savings surplus, government policies encouraging affordable homeownership, irrational consumer expectations of rising housing prices, and an inelastic housing supply. These authors conclude that the housing bubble was primarily caused by deregulation of housing finance. The consequence of deregulating mortgages resulted in the subsequent subprime mortgage collapse causing the dramatic drop in demand, substantial influx of homes to the market, and a steep drop in home prices.

All of which brings us back to Austin and whether or not Austin is in fact in a housing bubble or about to be one anytime soon.

Mark Sprague, a well regarded Austin economist with Independence Title, responded to Kolko in his blog, “Is Texas Overvalued?” Sprague strongly disagrees with the conclusions reached by Kolko. See chart below. He asserts that based on supply and demand, Texas is not seeing the beginnings of a housing bubble. He continues to say that “overvalue is overstated presently in the local and regional markets” and while it may be true that there are some individual listings are overvalued, the overall Austin real estate market is not overvalued. He goes on to point out that Austin appreciation has been one of the lowest in the country over the last 10 years. While Austin has seen strong appreciation recently over the past two years (a good thing), recent price changes by themselves cannot tell us whether this is a housing bubble. 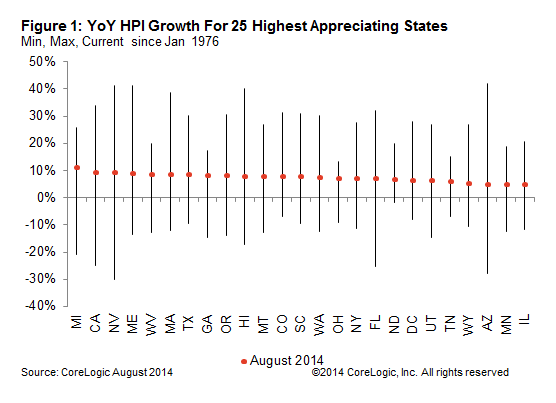 In fact, it is true demand and not irrational exuberance or speculation that is currently driving prices higher in Austin. Mark further states, “as supply gradually begins to catch up with demand, with current absorption and employment projections, it will be another 2 to 3 years before rising home values could become an issue.” The real estate and financial world has changed dramatically since the financial crisis of 2008, the pendulum has swung, and as a result “the ability to have a bubble in real estate is more restrictive now.” Instead of anyone and everyone having access to mortgage money, a leading cause of the previous bubble, now younger families and first-time homebuyers are less able to qualify as credit is much tighter than it was in the pre-bubble years.

Jim Gaines, another well regarded economist with the Real Estate Center at Texas A&M University, states “it’s economics 101. With strong demand and limited supply, you’re going to get increased prices. There’s no doubt that the Austin and Houston markets have been “very hot.” But “it’s a very different kind of world that we’re living in … and as far as I can tell, we don’t have crazy financing. We don’t have people overbuying unless they’re paying all cash. And we believe that people who are buying houses in today’s market can afford them.”

In other words, as both Mark Sprague and Jim Gaines say, the conditions that existed pre-bubble due to changes made in the lending and regulatory world are very different today than they were prior to the financial crisis of 2008. Unqualified buyers are locked out for now, which is a good thing, however, these new conditions are not without new problems. Presently, first-time homebuyers who traditionally make up 30 to 35% of the housing market today only make up 7% of the market. Without access to loans, they are being forced to rent instead of buy, which in turn has increased rents in Austin over 65% over the past 10 years. Ensuring an adequate supply of affordable housing is another problem that if left unaddressed has long-term consequences, but that’s a story for another day.

Compared to the country, Austin is one of the fastest growing metros with about 110 people moving to Austin per day, and boasts one of the lowest unemployment rates at 4.6% due to all of the companies relocating here. Forbes recently ranked Austin #1 as a U.S Region to Watch in 2014, with nearby San Antonio and Houston ranking 2nd and 4th. For the sixth time in a row, Texas was the highest-rated state in New York-based DCI’s business climate study. No state is even a close second! Texas Governor’s Office of Economic Development was ranked No. 2 “best in class” state-level economic development agency due to its pro-business environment, incentives and financial assistance. As Bill Evans, President of the Austin Board of Realtors, said, “population growth and job growth have always been the foundations of a healthy market and those two factors – not speculation – are driving price increases in Austin real estate.”

As Mark Sprague observed, and we agree, there has never been a better time to buy in Austin and Texas. Barring a catastrophic event, real estate values in Austin show little reason for decreasing. Appreciation will slow as supply begins to catch up to demand, but the concerns of another bubble in Texas and specifically Austin at this time are not well founded.

Key takeaways for anyone interested in buying or selling in Austin: No, Austin is not a bubble market. With interest rates remaining at historically low levels, and the economic vitality that Austin is blessed with, there has never been a better time to buy. At the end of the day, since all real estate is local, it is critical to engage with a knowledgeable real estate agent who can help you determine market value for buying or selling property so that as buyers you don’t overpay and as sellers you don’t have unrealistic expectations.