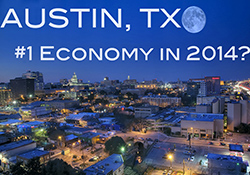 As if our economy wasn’t booming enough already, this next year in Austin is expected to have the fastest growing metro economy in the country. According to a report by IHS Global Insight, the Austin-Round Rock- San Marcos area is projected to grow its gross metropolitan product by 5.9 percent.

Gross metropolitan product is the value of all goods and services produced throughout a metropolitan area. Although neighboring metro areas like Dallas and Houston have much higher GDPs and total GMPs, the Austin metro area is expected to see more than a $6 billion increase in GMP between 2013 and 2014, which will result in the highest percentage growth in the nation.

One of the factors helping our economy top the charts again and again is the constantly decreasing unemployment rate. According to a report by The Texas Workforce Commission in October 2013, unemployment records showed a decrease from 5.3 to 5.1 percent, which amounts to almost 51,000 unemployed workers. Percentages in both Austin and Texas are much lower than the national rate, which was recorded at 7.3 percent in October.