Of the 105 largest U.S. metros, Forbes says Austin is the #1 Best Buy City with great job and population growth potential.

Just when you thought Austin’s housing market was becoming overvalued, Forbes recently rolled out their list of top cities to invest in housing for 2015 with Austin listed as the heavyweight champion. Not only is Austin forecasted to perform extremely well this year, 5 major Texas metro areas make up half of Forbes’ top 10 Best Buy Cites in 2015 Following Austin (No. 1), Texas cities with the best opportunities to buy include Houston (No. 3), Dallas (No. 5), San Antonio (No. 6) and Fort Worth (No. 10).

To create the list of best cities to invest in housing, Forbes teamed up with Local Market Monitor (LMM), a North Carolina-based data company that correlates home prices with average income to discover the most undervalued housing markets in United States.

Of the 105 largest metropolitan areas scanned by LMM, Austin came in first place with its population growth of 8.9% and jobs growth of 3.6%, surpassing national rates of a mere 2% for both.

Local Market Monitor’s Metrics for Austin, the Best City to Invest in US in 2015

With Austin’s high job growth rates and metro area population expanding by 158 people everyday, it is no surprise it ranks so high. However, the downside is the rapidly rising home prices making Austin home prices 8% over the average income price for its area. Even with higher home prices though, LMM still expects Austin to be a safe bet in 2015. This is because increasing home prices in Austin is largely due to economic fundamentals of supply of demand, not over inflation. More employers in Austin means more jobs; more jobs means more people will move here. As a result there will be more demand for housing that will increase home prices. Higher home prices in Austin does not mean there is a bubble because housing is consistently in high demand and inventory is so tight.

Some think that the recent plunge in oil prices could potentially affect average prices for homes in Texas, but LMM assures that Austin will fare better than most oil boomtowns because of its vibrant tech scene and diversified economy.

Investment and real estate aside, what makes Austin perform so well? In January 2015, the Milken Institute revealed their list of top 25 best-performing metropolitan areas in the United States ranking cities with the most jobs, highest wages, and technology innovation. Seven Texas metropolitans ranked as Top 25 Best-Performing Large Cities including Austin-Round Rock-San Marcos (No. 2), Houston-Sugar Land-Baytown (No. 7), Fort Worth-Arlington (No. 8), Dallas-Plano-Irving (No. 9), San Antonio-New Braunfels (No. 10), Laredo (No. 18), and Lubbock (No. 20).

Through their comprehensive research, Milken Institute discovered that the two underlying factors that drive the performance of top cities in America are technology and energy from oil. Another leading trait is the innovation advantage, which is the clustering of talent and technology in an entrepreneurial environment. Although Austin may not have the same concentration of such assets that one would find in San Francisco or Seattle, it provides an employment multiplier of close to 5; one tech position generating four other jobs. Additionally, the technological advances in horizontal drilling and hydraulic fracturing has helped cities in Texas as small as Victoria to the leading center of North American energy, the Houston-Sugarland-Baytown area, become leaders in production of shale energy in America.

Ranked second place, Austin has become the most consistent Top 5 finisher in the history of Milken Institute’s Best-Performing Cities index.

A city that’s economic growth is more stable than any other top tech center, Austin encompasses creative industry jobs and excels in active creation of technology. Over the past eight years, Austin has ranked in first, third, and ninth in terms of job growth. Internet-related services, computer systems design, biotech, and clean tech led Austin to the tenth highest concentration of technology production and companies like Web-sense, Illuminix, Ambiq Micro, Roku, and Marvell Semiconductor contribute to its growth. Firefly Space Systems, a private space sector, is looking to relocate to Austin to begin building the next generation of small rocket engines.

Milken Institute’s Growth Comparison Metrics for Austin, 2nd Best-Performing City in US in 2014 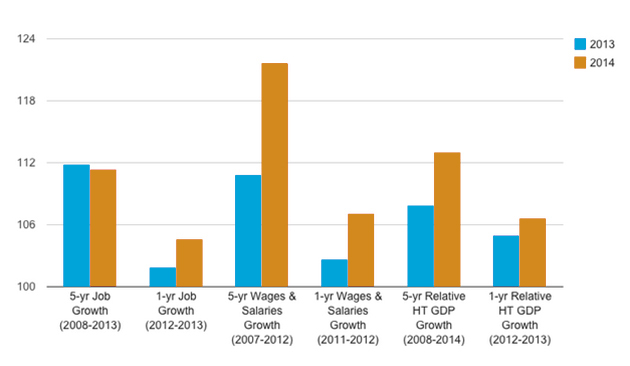 With one in three US jobs being created in Texas there’s no question that Austin is in the center of a job-creating machine. Where there are jobs, there are people in need of housing and plenty of opportunities for investors. Want to invest in the #1 real estate market in 2015? Reach out to one of our specialists or find out what your home is worth in today’s market with our FREE comparative market analysis tool. At Realty Austin it is our goal to provide the best customer service for buyers, sellers, and investors. Let us know how we can help you achieve your real estate goals in 2015.